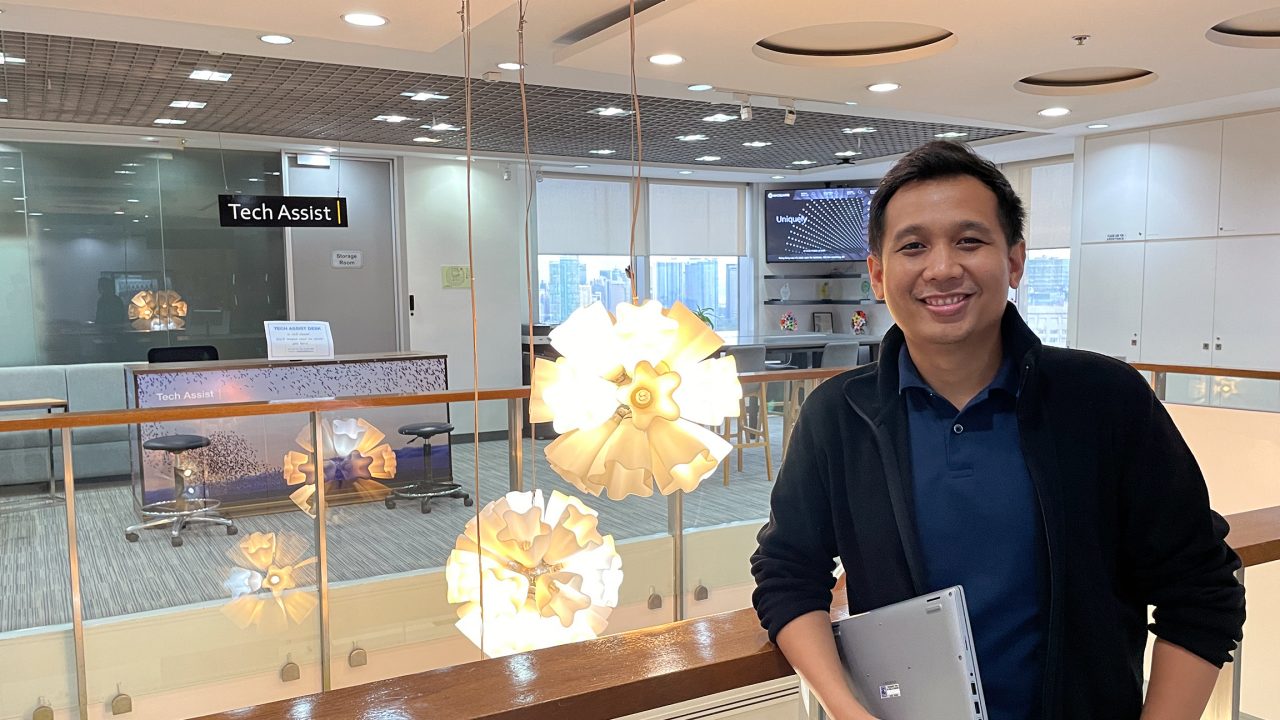 Theejay Natividad: Combining a career in change management with studies and charity work

A culture of flexibility is one of the benefits that attracted Theejay Natividad to Macquarie’s Manila office 10 years ago. He says this has allowed him to continue graduate studies and contribute to charity, while growing his career in change management within the Market Operations Division.

Theejay Natividad has enjoyed a decade working in Market Operations in Macquarie’s Manila office. He is currently a manager working on change support for reconciliations.

Theejay says he gains great satisfaction from being part of process improvement in financial operations.

“In terms of work, I’m given my own initiatives to manage, and that autonomy is a big part of why I enjoy it,” he explains.

Theejay also says the culture at Macquarie has enabled him to further his career while pursuing his commitment to helping the wider community through charity work.

“The flexibility on offer at Macquarie, even prior to the pandemic, allows me to juggle and balance my obligations, both inside and outside of work.”

It is this flexibility that has, with the encouragement of his managers, allowed him to study for his Master of Management to enhance his skills. It has also helped him make significant contributions to the Storytelling Project, a not-for-profit initiative to increase children’s literacy in remote communities, which he has worked on with the support of the Macquarie Group Foundation since 2018.

“The Storytelling Project is a big pull for me because I’m passionate about promoting reading and children’s education,” Theejay says.

Theejay spearheaded a fundraising initiative at Macquarie for the project and later travelled to a remote community in the Philippines to help establish a library.

With Macquarie’s support, we built a bamboo library in the remote community of Masbate and provided students with books, a storytelling program and school supplies, which was a great experience.”

“I like being part of the Macquarie community and seeing the impact of the help that the organisation is extending to the underprivileged and the wider community through charity initiatives,” Theejay explains.

Finding a niche in data and financial operations

Having completed a BSc in Commerce major in Economics in 2009, Theejay began his career in reconciliations as a derivatives transaction specialist for a large US bank. He then spent half a year working in a research role for a media company.

“My experience showed me that I’d found a niche in reconciliations and financial operations,” Theejay says. “I liked playing with numbers and was drawn to process improvement and data trends.”

Theejay first heard about Macquarie from former colleagues, who told him of the culture, the great team dynamics and its Employee Network Groups.

“I set my sights on Macquarie because I could see the possibility for a work-life balance through the culture and benefits.”

Improving processes and growing a career

Along the way, Theejay’s role has grown from working in and on reconciliations as an analyst to working as a change manager on new systems and digital transformation for the team.

“My career progression has been a result of me engaging with process improvements,” he explains. “I became a major contributor to automating many manual processes.”

Theejay says one highlight has been learning to use robotics and other tools for data automation to improve tasks through software. Another has been the opportunity to get involved in the upgrade of the main strategic reconciliations platform, Transaction Lifecycle Management (TLM) Premium, to enhance the tool’s feature and create more capacity for the team.

“I was excited to be part of these initiatives because I’m always looking to upskill myself with new technologies and learn new things,” he explains.

Beyond the support he has received to undertake his master's degree, in 2019 Theejay also had the chance to travel to Macquarie’s India office to participate in Innovation and Human Centred Design (HCD) training.

“These workshops helped me to be a better contributor and change manager, and I’ve enjoyed applying these skills in my team.”

The challenge in change management

As a change manager, Theejay is part of the change team, which sits within the wider reconciliations team. They support the growth of the business through transformation and digitalisation.

“We have a list of team initiatives that we want to achieve, around eliminating failure demand, automating processes, and creating enhancements to uplift and improve the user experience of our team and stakeholders,” Theejay explains.

“I deal with prioritisation, and coordinate with my team, who are comprised of analysts and testers,” he explains. “A lot of my day is spent liaising with technology developers and business stakeholders, refining requirements, and managing timelines and deliverables.”

“As a change practitioner, we deal with challenges all the time - it’s inherent in the job. But the team dynamics and support are great, and I enjoy gaining new skills and knowledge, which are part of the journey.”

Theejay says he likes the exposure to tech systems and the range of people he gets to know - from business analysts to market operations and tech experts.

Macquarie’s culture is a big attraction for me. I work with a pool of talented and competent people, and the environment, in terms of the physical office, flexibility, and team collaboration is conducive to working.”

“My colleagues and managers are always open to questions and discussion - we have a transparent relationship and talk about our experiences, issues, and how we’re feeling.”

Beyond his charity work, Theejay has been a member of the Outdoor Employee Network Group.

“We unwind by hiking in the mountains,” Theejay says. “It’s great to meet like-minded people from different teams and departments across Macquarie.”

“The Employee Network Groups are integral and reflect the fact that people have fun and love what they’re doing, and they’re supported by Macquarie.”