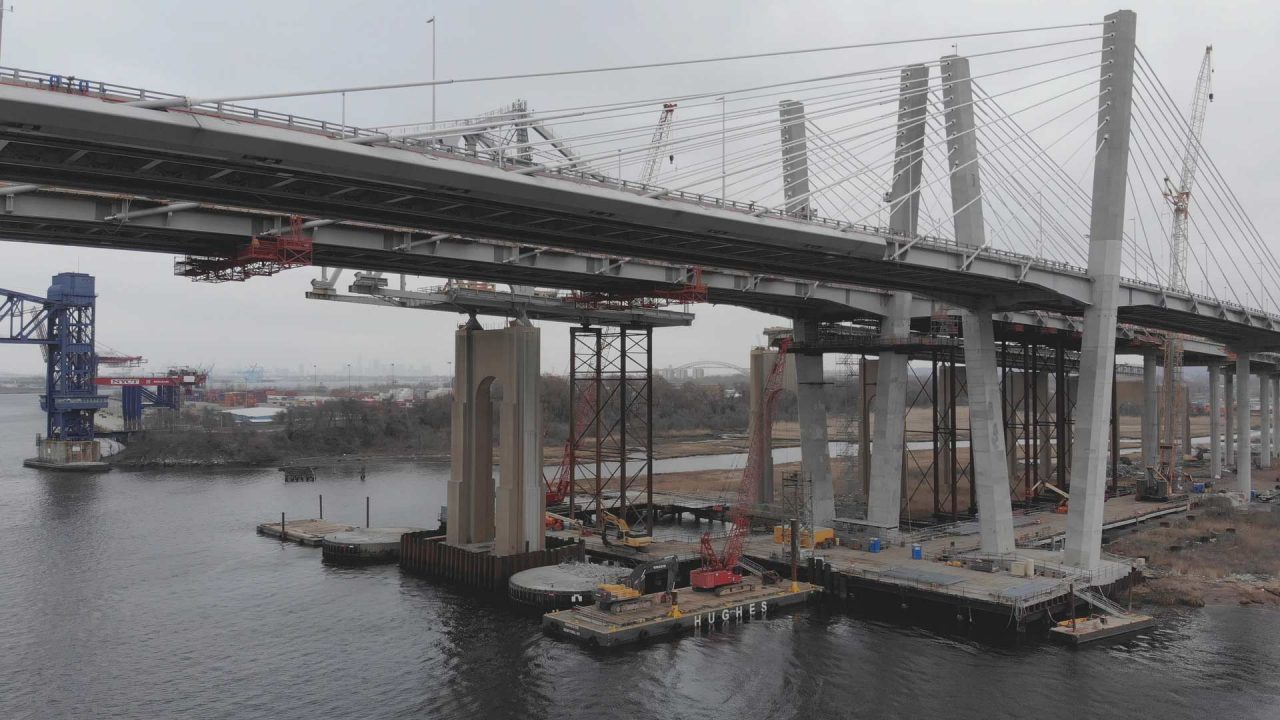 Over the next five years, NYNJ Link worked collaboratively with numerous government entities and other stakeholders to deliver the $US1.5 billion Goethals Bridge. The project was the Port Authority of New York and New Jersey’s first long-span bridge built in the region in 80 years.

Goethals Bridge serves as a critical transport connection between the states of New York and New Jersey. The original steel truss bridge opened in 1928 carrying prohibition-era cars between Staten Island and Elizabeth. The four 10-foot wide lanes on the original bridge had ample room for Model-T Fords, however, by 2013 it carried approximately 32 million vehicles annually, including heavy trucks.

The project to finance and build a replacement Goethals Bridge was the first Public Private Partnership for the Port Authority.

A task force approach to collaboration and innovation

"This is the first major, new bridge erected in New Jersey in decades and it was long overdue, as anyone who navigated the old Goethals Bridge can attest… Drivers have been nervously gripping the steering wheel of their cars just to stay in the narrow lanes designed in the 1920s for the nation's first generation of automobiles… It was built under a major private-public partnership, which resulted in a swifter project completion than had we relied solely on the public sector.”

Connecting two states and two cities, the project had to consider the current and future needs of numerous stakeholders. This required extensive consultation with local authorities and commuters, as well as significant environmental protections for seasonal spawning fish in the river below and bird life in neighbouring wetlands.

The NYNJ Link consortium created a ‘task force’ environment with the Port Authority to tackle challenges large and small across planning, engineering design, management of existing traffic flows, scheduling of works and construction. The construction of the project saw over three million union craft hours recorded2.

This approach generated a number of innovations, including one of the most consequential elements in the bridge’s design – a dual-bridge solution, splitting the tower and separating the eastbound and westbound structures. This innovative design gives the structure a service life of 150 years. It also ensures that the bridge is designed to meet the evolving needs of the region, including future mass transit expansion.

Focused on current and future generations

"The Goethals Bridge is a vital artery connecting millions of travellers across the New York metropolitan area, and this new state-of-the-art crossing will ease travel for current and future generations of New Yorkers and residents from surrounding communities."

"The completion and opening of the second span of the Goethals Bridge project represents one of the most important infrastructure enhancements undertaken in the New Jersey-New York metro region in more than eight decades… These critical improvements will ease congestion and provide a safer driving environment for daily commuters and the more than 32 million travellers who use the bridge annually."

The eastbound span of the new Goethals Bridge opened to traffic in June 2017, with the westbound span opened in May 2018. On completion, the project had injected over $US870 million in economic activity to the area4.

The Goethals Bridge Replacement Project has been recognised for its innovation, collaboration and safety record. It was chosen unanimously by judges of the Engineering News Record Awards to be New York’s ‘Project of the Year’ for 20185. It was also named New York’s ‘Best Project’ in the highway/bridge category and won the ‘Excellence in Safety’ award5.